By Teresita Ang See
Volunteering, No. 3

Typhoons Ondoy and Pepeng left behind people picking up the pieces. Many families lost everything they had: their homes, businesses, precious mementos of happier times, even their loved ones.

The thousands of relief packs our organization, Kaisa Para Sa Kaunlaran, and the Tsinoy community brought to them seemed so little compared to the magnitude of their losses. But in each relief pack were the sweat and hard work of volunteers who filled them one by one and organized their distribution to the most needy, and the largesse of donors who magnanimously shared their resources.

Inefficient local government units were nightmares. In one place, Kaisa had to stop distributing goods and pull out because we were almost mobbed. We also refused to leave the relief goods at the municipal hall, having heard from other organizations that goods left unattended may be used as campaign paraphernalia, or even sold at sari-sari stores. In another area, there were no barangay officials at the evacuation center and no headcount of how many people were actually there.

But there were rainbows of hope when we encountered efficient people’s organizations and parishes.

In San Mateo, Rizal, Ka Nilo of the Buklod Tao was firm that we follow their community processes of surveying and accounting for priority families to which Kaisa was more than happy to oblige!

In San Pedro, Laguna social worker Cathy Gorme of Kanlungan sa Er-ma efficiently coordinated with the municipal councilor regarding yet unserved areas. She and her staff personally visited each house on bancas to give them claim tickets for the relief goods that Kaisa delivered.

In Calamba, Laguna, Kathleen Baez with staff and volunteers of the Southern Tagalog People’s Response Center held a list of all the household heads whose members were staying in each classroom of the school-turned-evacuation center. They called out names of the heads from each class, and everyone lined up like obedient children.

Kaisa board members Baldwin Kho and Charles Ng hired motorized bancas to reach the stricken areas of Bai, Laguna with volunteers from St. Augustine Parish. It was heartrending to see victims wading through waist-deep water to claim the small packs of assistance. 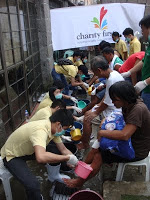 In Marikina, scholars of the Charity First Foundation, a third of whom were also affected by Ondoy, organized themselves on a medical mission. They personally washed the feet of those afflicted with fungus caused by the floodwaters. Afterwards, the doctors checked the affliction and prescribed the medication.

The Tzu Chi Foundation volunteers helped clean up people’s houses and gave them food, mats and blankets. Everyday, they visited Nangka, Marikina for two weeks; rented heavy equipment, bulldozers and payloaders; and hired 3,000 workers at P400 each to help clean up the area of mud and debris. The workers asked only for food for work exchange but the Buddhist group thought it was also a good way for them to earn something more.

Volunteer firefighters, busy with rescue operations even at the height of the typhoon, were in great demand to help clean up schools, churches and residential areas; pump out floodwater from buildings and underpasses; and deliver water to afflicted communities.

KC Alumni (So Chiat) are giving school bags with pencils, notebooks and pads to about 5,000 students in ravaged areas. World News, Overseas Chinese Alumni Association of the Philippines, Philippine Chinese Chinese Amity Club and Shin Lian Association partnered to raise funds. Kaisa closely coordinated with them and they readily distributed to places Binan and Sta. Cruz in Laguina and Taguig in Rizal. The Movement for Restoration of Peace and Order went with Kaisa on several relief missions and helped procure vehicles for transport to remote areas.

Moving north after Pepeng devastated Northern and Central Luzon, we encountered the hardworking So family of Pangasinan. Setting aside their own submerged warehouse, Richard and Rosendo So immediately gave 1,000 sacks of rice and with the canned goods Kaisa provided, they distributed food to those hardest hit in Rosales and La Union.

The victims in the provinces were more receptive, orderly, and better behaved than those in Metro Manila where people seem to have attitudes of entitlement, as though the world owes them. Many who received relief packs tried to get more. Those who were not in the list of recipients would shout: “If you can’t afford to give to all of us, just go home.”

In Dagupan, the Panda Volunteer Fire Brigade became an impromptu command center for relief distribution. Church, other civic groups, as well as business organizations, coursed their donations through Panda. This streamlined the process so all disaster areas would be equally served. The efficient firemen worked well with the barangay and purok leaders.

This vibrant spirit of sharing and caring helped build rainbows of hope. Despite the seeming lack of governance, our people can help one another and move on.

View all posts by iVolunteer PH

This site uses Akismet to reduce spam. Learn how your comment data is processed.